Kari and I have begun putting in our garden.  This year, we’re going for a 15’x10′ patch, limited by the amount of yard we were willing to fence from our Mongrel, Curly.

After the first couple hours of work. Pick axes are much better than last year’s pitchfork and shovel method.

Clearing was uneventful – just the better part of 2 days.  Things got more interesting when I tried to put in the fence posts.  I ruptured the sprinkler system.

Kari and I had to rush to our nearest hardware store and debate about the quickest, easiest way to cap the lines so that we could have water for the night.  We ended up with a neat new no-glue solution that ended up saving a lot of time and headache!  Then, the next day, I did it again. It was also a much worse rupture this time. 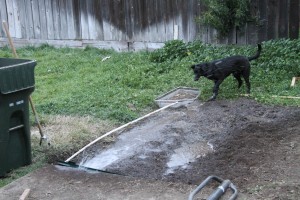 Curly was outside with me this time, and was thoroughly entertained. Curly was less entertained when he had to take a bath afterwards.

Before the leak, I had just received my fancy new wannabe farmer hat.  I had grand plans for surprising Kari when she got home from her late-night teaching job by letting her find me in my Man Cave with my hat on, drinking beer and playing video games.  My plans were foiled.  Kari was amused.  I was a mess. 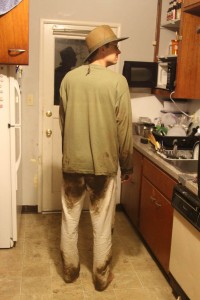 In the end, it was totally worth it.  We tried to do a keyhole design to maximize the plantable area. 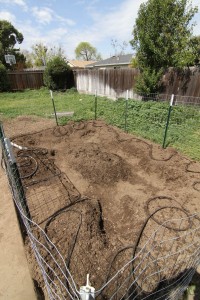